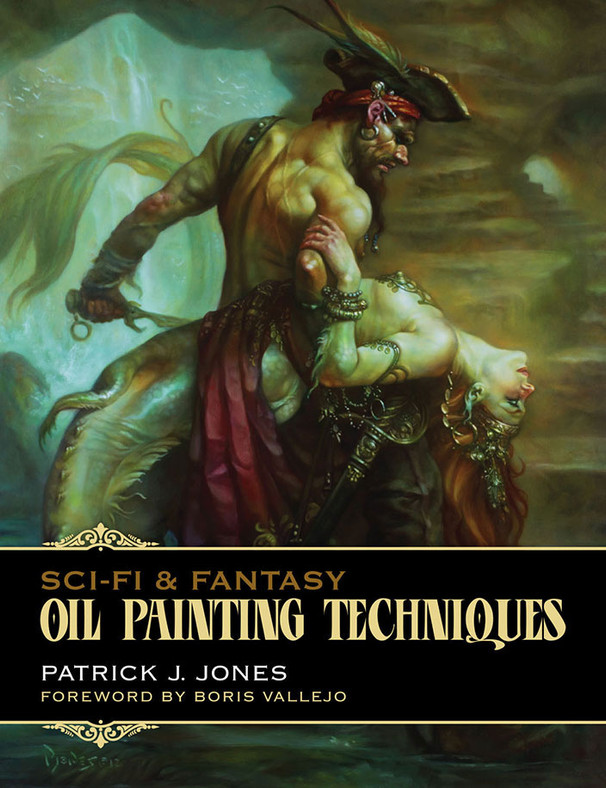 A unique, behind-the-scenes look at the creative process and artistic philosophy of one of the masters of sci-fi and fantasy art, Patrick J. Jones. He shares the secrets of painting Conan, mermaids, and other-worldly creatures, from initial pencil sketches to finished art. Featuring detailed, step-by-step tutorials packed with information, advice, anecdotes, and professional tips and tricks. A must for any serious student of the genre or any fantasy art fan.

Foreword by Boris Vallejo
Born in Lima, Peru, Boris Vallejo immigrated to the United States as a young man, with just $80 in his pocket. Before long his incredible oil paintings appeared on the covers of magazines such as Eerie, Creepy, and The Savage Sword of Conan, thus inspiring a new generation of young artists. Since then he has produced decades worth of fantasy art and is admired the world over as one of the all-time greats of the genre. Boris is married to renowned artist Julie Bell, who paints alongside him in their Pennsylvanian studio.

Patrick J. Jones is an award-winning sci-fi and fantasy artist and teacher. His work is collected and published worldwide and his client list includes companies such as Disney, Lucasfilm and Roc books. Patrick grew up in Belfast, Ireland, during the worst of the "troubles". Influenced by artists Boris Vallejo and Frank Frazetta, he spent long days in the sanctuary of rooftops, drawing and dreaming of becoming a fantasy artist, to the din of street riots below. After two years in the merchant navy, he moved to London and spent 15 years as an illustrator before travelling the world once more.Today Patrick lives in Australia with his loving wife, Cathy, and their two dogs.
×
×