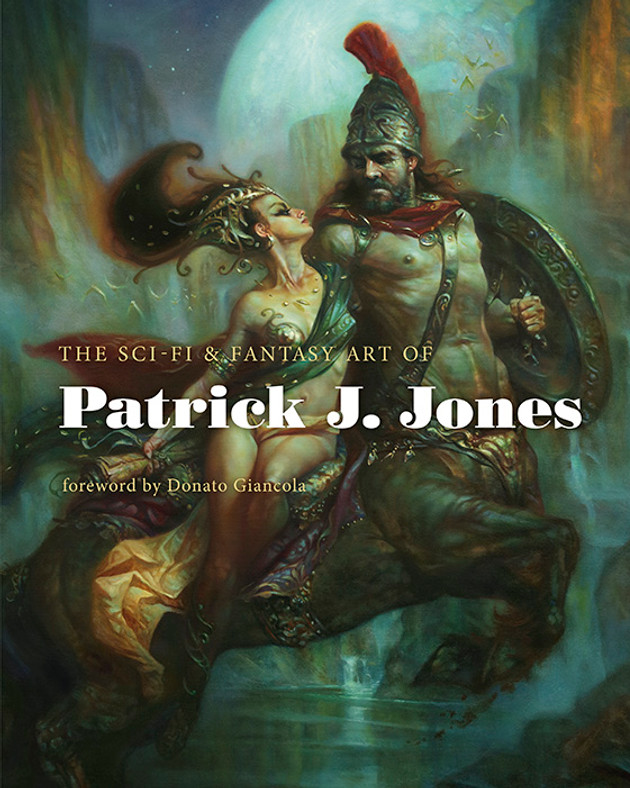 Featuring more than 100 sumptuous paintings created over a 10-year period, this retrospective of the work of Patrick J. Jones – one of the biggest names in fantasy and sci-fi art today – teems with the heroic figures, mermaids, fantastic beasts, enchanted worlds, and extraordinary creatures for which he is known.

Foreword by Donato Giancola
American Donato Giancola is one of the most renowned and awarded fantasy artists of his generation. Popular and successful, he is noted for his work based on J.R.R. Tolkien's Lord of the Rings and the collectible card game Magic: The Gathering.

“This is a must-have; we've already been captivated by his work for the two how-to books he's done. This may just be our favourite art book of the year.” – Bud Plant

“Patrick is a phenomenal artist, equally versed in both traditional and digital methods.” – Dan Dos Santos

“I expect to be impressed by every piece that comes out of the hands of Patrick.  His control of the paint and brushes is truly amazing.” – Boris Vallejo

“Being a professional artist for almost 40 years, it takes a lot these days for a piece of art to really impress me at first glance, The first time I saw “The Forbidden Kingdom”, a painting of Conan and a female figure by Patrick Jones, it stopped me cold. I was looking at a perfect combination of Frazetta, Vallejo and Buscema, painted in a uniquely classical style I had not often seen utilized in the genre. I instantly sought out more of his work and was continuously amazed by his impeccable technique and mastery of his medium. He’s an incredible artist who I believe will have a huge influence on the next generation of aspiring fantasy painters.” – Joe Jusko

“Patrick's work explodes with passion, light and shadow. His handling of oil paint is clearly his own, and each of his books have been an inspiration and great masterclass of time-honoured traditional painting. His books are essentials in any creative person's library.”  – Bob Eggleton

“The work of a driven man! Driven by an incredibly focused passion for those timeless elements…The physicality of heroic myth and unabashed eroticism. The clear and unapologetic love of technique - that hard coalface of our trade that serious artists have to fight so hard to master. The otherworldy strangeness of it all. An imagination on overdrive.” – Jim Burns

Patrick J. Jones is an award-winning sci-fi and fantasy artist and teacher. His work is collected and published worldwide, and his client list includes companies such as Disney, Lucasfilm and Roc books. Patrick grew up in Belfast, Northern Ireland, during the worst of the “troubles”. Influenced by artists Boris Vallejo and Frank Frazetta, he spent long days in the sanctuary of rooftops, drawing and dreaming of becoming a fantasy artist, to the din of street riots below. After two years in the merchant navy he moved to London and spent 15 years as an illustrator before travelling the world once more. Today, Patrick lives and works in Australia. When he's not painting he teaches art at universities in the city of Brisbane, where he now lives with his wife Cathy and their two scruffy dogs.