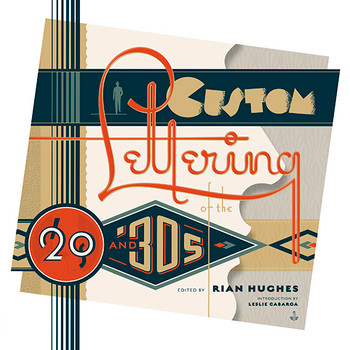 Order a copy of Custom Lettering of the ’20s and ’30s and receive a FREE copy of the font Capitol Skyline Underline, worth $49 with every order.

Custom Lettering of the ‘20s & ‘30s is a celebration of the beautiful and stylistically diverse hand-drawn lettering that dominated book covers, magazines, posters and advertising in the inter-war period. Elegant modernistic type experiments jostle for attention with playful expressive brush lettering, illustrated novelties, heavy geometric sans serifs, dramatic inlines, drop shadows and all manner of outré typographic extravagances. With over 6,000 images categorised by style for easy reference, this book is an invaluable typographic inspiration for the designer, typophile, vintage magpie and anyone with an interest in 20th century culture. A cornerstone of any type-lovers library.

Rian Hughes is a graphic designer, illustrator, comic artist, author, and typographer who has worked extensively for the British and American advertising, music and comic industries as both designer and illustrator. The author or designer of more books than he can remember, he is the designer of numerous CD and vinyl sleeves for obscure indie labels as well as mainstream acts, ranges for Swatch and logos for James Bond and Batman. The book Art, Commercial is a retrospective monograph published in 2001. Recent books include Cult-ure: Ideas can be Dangerous and Lifestyle Illustration of the ‘50s. His comic strips have been collected in Yesterdays Tomorrows and his burlesque art in Soho Dives, Soho Divas. His fonts are released via his own label, Device Fonts.

Read our interview with Rian Hughes.

Zavier Leslie Cabarga is an illustrator, type and logo designer, and author of many published books including Progressive German Graphics, Dynamic Black and White Illustration, The Logo, Font & Lettering Bible and Learn FontLab Fast. As an illustrator, Zavier’s work has appeared in New York Magazine, The New York Times, Wall Street Journal and on the covers of magazines such as Time, Newsweek, Fortune, National Lampoon and Screw. From 1975 Cabarga offered hand lettering and logo design services under the nom de plume Handy Lettering Company and by 1993 he’d created the first of many successful computer fonts including Magneto Bold, Streamline, BadTyp and Casey Bold, all of which can be found at LeslieCabarga.com.