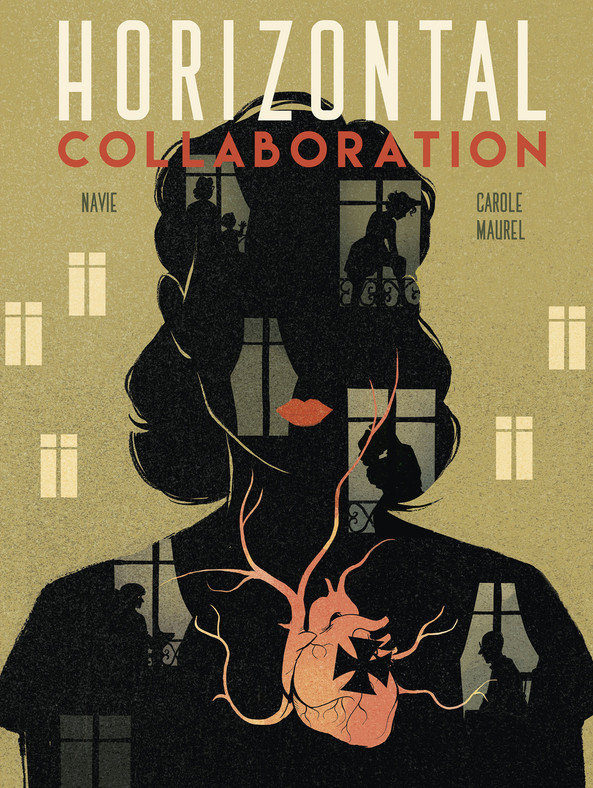 Check out the book's dedicated Facebook page for sketches, early designs, background info and all the latest news and offers.

‘Horizontal Collaboration’ is a term used to describe the sexual and romantic relationships that some French women had with members of the occupying German forces during World War II. In this poignant, female-centred graphic novel created by writer/artist duo Carole Maurel and Mademoiselle Navie, the taboo of ‘sleeping with the enemy’ is explored through the story of a passionate, and forbidden, affair.

In June 1942, married Rose (whose husband is a prisoner of war) intervenes in the detainment of her Jewish friend and then accidentally embarks on a secret relationship with the investigating German officer, Mark. There is only one step between heroism and treason, and it's often a dangerous one.

Inside an apartment building on Paris’s 11th arrondissement, little escapes the notice of the blind husband of the concierge. Through his sightless but all-knowing eyes, we learn of Rose and Mark’s hidden relationship, and also of the intertwined stories and problems of the other tenants, largely women and children, who face such complex issues as domestic violence, incest, and prostitution.

This fascinating graphic novel tackles the still-sensitive topic of who it is acceptable to love, and how, and the story's drama is brought vividly to life by intimate and atmospheric illustrations.

“...breathtaking in its ambition. Don't expect a sweet, or even melancholy, love story here; this is an uncompromising read that gets under the skin.” — Shelf Abuse

“...a balance of war-time romance and tragedy presented beautifully. Recommended for anyone who likes period pieces, particularly those created by and about women.” — Grovel: Graphic Novel Reviews

Carole Maurel cut her teeth on animated films before devoting herself to illustration, in particular, graphic novels. Her 2017 book The Apocalypse According to Magda was awarded the Artémisia Avenir award, which celebrates women in comics.

Navie is a screenwriter for press, cinema and television. She has a degree in history from The Sorbonne in Paris, where she specialized in the history of fascism – making Horizontal Collaboration an excellent fit for her first graphic novel.