Estrus: Shovelin' the Shit Since '87 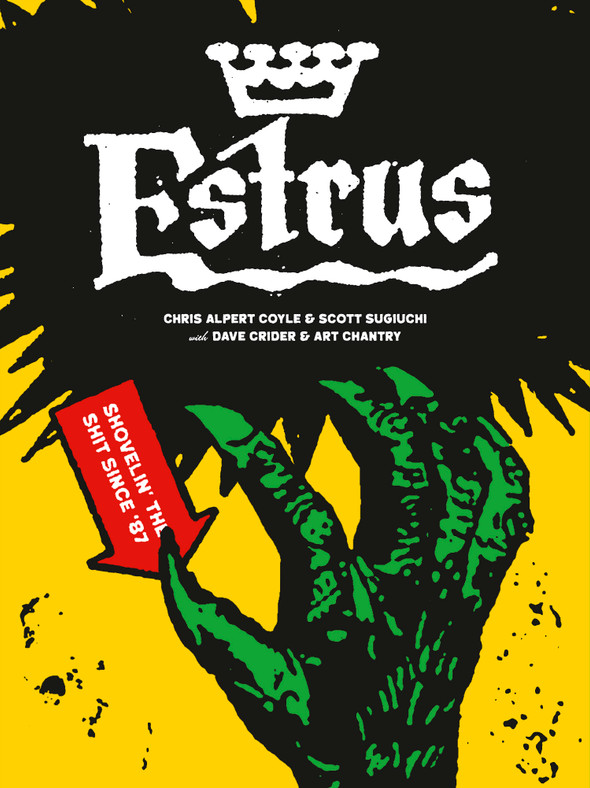 Estrus: Shovelin' the Shit Since '87

Shovelin’ The Shit Since ’87 is the complete, as-yet-untold, story of US garage rock powerhouse Estrus Records, which for nearly two decades churned out hundreds of releases from some of the biggest garage, trash, surf, and punk bands worldwide, among them The Makers, The Mummies, Man…or Astroman?, and label head honcho Dave Crider’s drunk/punk quartet The Mono Men.

Shovelin’ charts the label’s highs and lows – from its highly successful hosting of the annual Garageshock – arguably the greatest series of garage rock “festivals” – to the devastating loss of its warehouse in a fire that virtually wiped out its mail-order stock, as well as master tapes and precious personal possessions. Estrus is one of the few record labels whose cover art and other graphics matches the brilliance of its music, thanks to the contributions of US trash-culture visionary Art Chantry, as well as more familiar names like Peter Bagge and Pat Moriarity, and the book is packed with many of its iconic visuals. It also draws on lively, extensive interviews, never-seen-before archival photos, oddball artefacts and more to give a fascinating insight into the major players behind one of garage rock's most influential and successful independent record labels.

Chris Alpert Coyle is a nomadic journalist whose work has appeared on CBS News, CBS Radio, WGN, The Inlander and KEXP. His limited musical ability has allowed him to tour the U.S. with fantastic bar bands like Squish! and Sir Coyler & His Asthmatic Band. He has ties to Sacramento, San Diego, Seattle and Chicago.

Scott Sugiuchi has been designing for over 30 years. Highlights include work for Artisan (The Blair Witch Project), the American Film Institute and countless bands, record labels and venues. He lives in Baltimore, Maryland, plays bass in four bands and is the founder of Hidden Volume Records, a boutique record labelwith more than 50 releases from bands around the globe.

Dave Crider co-founded Estrus in 1987 as a way to release his then band The Roofdogs. After taking over as label head a few years later, Crider expanded the roster and watched his hobby inadvertently change into a cultural phenomenon.

Art Chantry is a designer most often associated with the logos, posters and album art he created for countless punk, grunge and rock bands and their labels. His work has been exhibited at the Rock and Roll Hall of Fame, the Museum of Modern Art,Seattle Art Museum, the Smithsonian and the Louvre. He is the author of the cult book Art Chantry Speaks: A Heretic’s History of 20th-Century Graphic Design.

PodShock is our podcast promoting the upcoming release of Estrus: Shovelin' the Shit Since '87. The hour-long episodes will feature exclusive interviews, a wide range of music, guest hosts, unbridled charm and consistent technical difficulties.

PodShock is also available on all the major Podcast directories such as Apple Podcasts, Spotify, Google Podcast and Deezer.