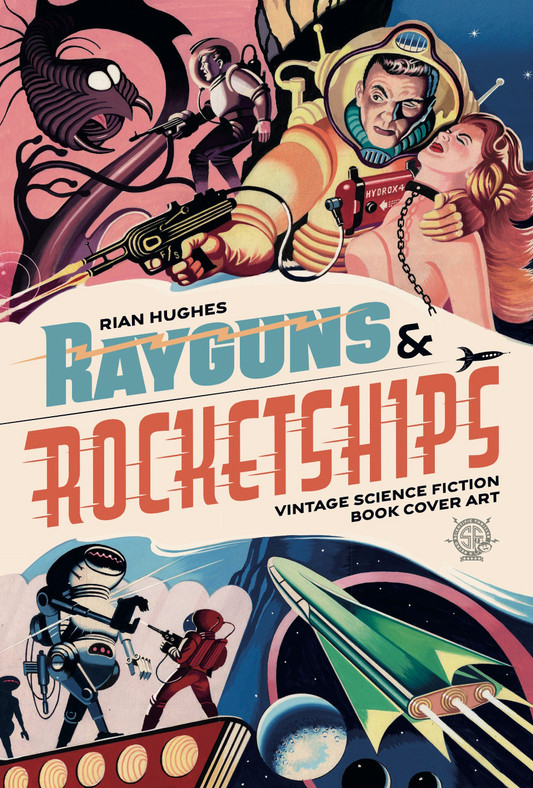 Science-fiction paperbacks exploded over the 1940s and ’50s literary landscape with the force of an alien gamma bomb. Titles such as Rodent Mutation, The Human Bat vs The Robot Gangster, Dawn of the Mutants and Mushroom Men from Mars appeared from fly-by-night publishers making the most of the end of post-war paper rationing. They were brash and seductive – for around a shilling the future was yours.

The stories were often conceived around a pre-commissioned cover and a title suggested by the publisher, and the writers were paid by the word, and sometimes not paid at all. Titles were knocked out at a key-pounding pace, sometimes over a weekend, by authors now lost to literary history (plus a few professionals who could spot an opportunity) who were forced to write under pseudonyms like Ray Cosmic, Steve Future, Vector Magroon or Vargo Statten.

Despite the tight deadlines and poor pay, the books’ cover artists still managed to produce works of multi-hued, brain-bending brilliance, and collected here is an overview of their output during an unparalleled period of brash optimism and experimentation in publishing.

A big thank you to all those that originally backed this book on Kickstarter. Your support is greatly appreciated.

Compiled by Rian Hughes
Rian Hughes is an award-winning graphic designer, illustrator, comic artist, writer, and typographer who has worked extensively for the British and American advertising, music, and comic book industries. His recent books include Custom Lettering of the ‘20s and ’30s, Logo-a-gogo, and the novels XX and The Black Locomotive. He has an extensive collection of Thunderbirds memorabilia, a fridge full of vodka, and a stack of easy listening albums which he plays very quietly in his home in London.

Foreword by Steve Holland
Steve Holland began collecting books and comics at the age of seven. He began researching and writing about authors and artists in fanzines and collectors’ magazines, and has published 1,600 features, interviews, news columns and obituaries in publications around the world. He has written, co-written, edited or co-edited over 100 books, including the Anthony Award-nominated The Mushroom Jungle and The Trials of Hank Janson, a runner-up for the Silver Dagger Award of the Crime Writers’ Association. Since 2011 he has published over 30 titles under the Bear Alley Books imprint.

Afterword by Philip James Harbottle
Philip James Harbottle discovered J.R. Fearn’s “Vargo Statten” novels as a teenager. Researching their history led to his editing the science-fiction magazine Vision of Tomorrow in 1969 and contributing to many science-fiction reference books. His own non-fiction books include The Multi-Man and The Tall Adventurer, bio-bibliographies of Fearn and E.C. Tubb, respectively. He has published numerous posthumous novel collaborations with Fearn and has edited several anthologies. His latest non-fiction book is Vultures of the Void: the Legacy, a unique personalized history of British post-war science-fiction publishing, which he is currently adapting to video on his YouTube channel. As well as pursuing his own writing, he runs the Cosmos Literary Agency, specializing in science-fiction, detective and Westerns.

A glorious celebration of SF's past. Thoroughly recommended. —SFF World