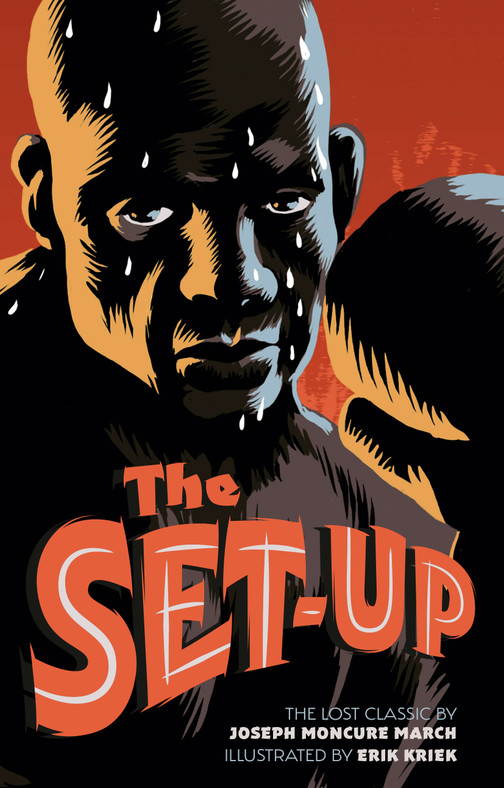 Written in 1928, The Set-Up is a long narrative poem about the US boxing underworld – a hard-boiled tragedy told in syncopated rhyming couplets. When the work was first published it made the bestseller list, and in 1949 it was turned into an award-winning film featuring Robert Ryan and Audrey Totter.

This reprinting of the original, unchanged 1928 poem features dynamic, specially commissioned artwork by Erik Kriek that vividly conveys the story of Pansy, an up-and-coming black prize fighter who takes on all comers. When he was in the ring, “It was over before you knew it. He'd carve you up like a leg of mutton. And drop you flat with a sock on the button.” Pansy’s complicated love life leads to a spell in prison and his career subsequently takes a nosedive; but he continues to box until the fateful night his fight managers and opponent triple-cross him and he meets a grisly end at the hands of a vengeful gang.

About the author
Joseph Moncure March (1899–1977) was the first managing editor of The New Yorker, and helped create the magazine’s Talk of the Town front section. After leaving the magazine, March wrote the first of his two important Jazz Age narrative poems, The Wild Party. In 1928 he followed it with The Set-Up. Moving to Hollywood in 1929 he became the scriptwriter who turned the silent version of Howard Hughes’ classic Hell’s Angels into a talkie – a rewrite that brought the phrase “Excuse me while I put on something more comfortable" into the American lexicon. A screenwriter in Hollywood until 1940, March eventually became a writer of documentaries for the US State Department and a feature writer for The New York Times Magazine.

Read our interview with the illustrator Erik Kriek.

Erik Kriek is an award-winning illustrator, designer and comic artist from Amsterdam. He is best known for his Gutsman comics, for which he won the Dutch award Stripschaprijis in 2008. In 2012 he published From Beyond and Other Tales, his collection of graphic reworkings of short stories by H.P.Lovecraft. Among his influences are US artists Daniel Clowes, Will Eisner, Charles Burns and Chris Ware, as well as the classic 1940s horror comics of E.C. Comics by such artists as Wallace Wood. He has also expressed admiration for Dutch artists including Peter Pontiac, Typex and Peter van Dongen. He lives in the Netherlands with his girlfriend and son.