The beginning of the 1930s marked a momentous cultural shift. The stock market collapse in the United States had triggered waves across the Western world, putting many out of work and abruptly ending the economic prosperity of the Roaring Twenties. Amid a world re-building itself after World War I sat Paris: established in the hearts and minds of many as The City of Pleasure.

In 1930, in Paris's 2nd arrondissement, Victor Vidal set up a bookstore which inadvertently started what was to become the first chain of sex shops. He and his associates sold pornography almost openly in their bookstores; they were the real ancestors of the shops in the city's Pigalle area today. On the street the shop's window display contained nothing to offend the passing customer — luxuriously printed folio books rubbed shoulders with the Kama Sutra — yet the rare and artistic photographs were secretly stored in the back of the shop, hidden from view by a discreet curtain. Less than a dozen photographers supplied Vidal's semi-clandestine network; the most prolific and the most gifted were the Biederer brothers. 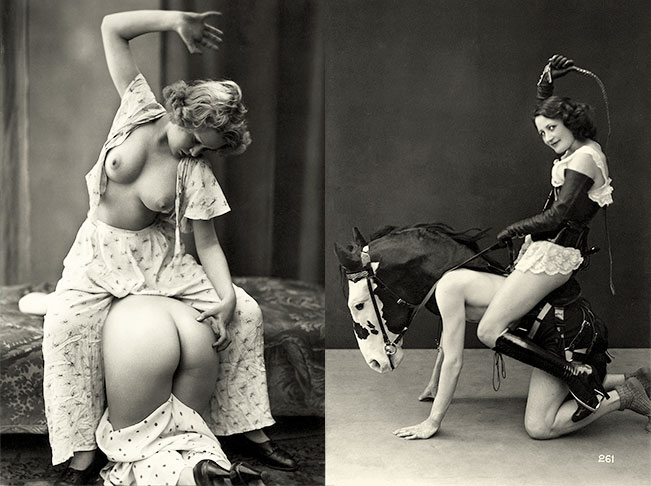 Jacques and Charles Biederer had come to Paris some 20 years earlier. Together, they started a photographic business, and in homage to their hometown — Moraska-Ostrava in the Czech Republic — they named it 'Ostra Studio'. The two brothers were reportedly strikingly similar in appearance. They specialised in 'glamour' photographs, and also produced a series of silent fetish movies depicting scenes of dominance and submission such as Dressage au Fouet. While the majority of the Biederer studio's output skirted the limits of acceptability, it is not what we would today classify as pornography. These photos were not taken to shock the general public, but more to lure them in by presenting a range of attractive, even ironic, fantasies. The Biederers' photographs are beautifully stylised and highly distinctive, often centring on heart-shaped buttocks and domination.

'Glamour photographers' in the interwar period in France were patrolled by the legions of decency, which harassed those actively participating in the business of erotica in order to take them to court. Therefore 'glamour photographers' opted not to leave any identifying features on their images; indeed the brothers never signed their photographs, instead leaving a signature of style. They therefore claimed affinity with those artists who worked in the shadows and managed to thwart the police and art historians for generations. However, in 2007 writer and historian Alexandre Dupouy published the results of his investigation into their work; he broke through the anonymity of the Biederer brothers to establish a Biederer style and identify their body of work. Yet with this research came the awful discovery of the brothers' tragedy. The surname Biederer appears on the list of those on the deportation convoy No. 6 of 17 July 1942, as established by the Archives of the Contemporary Jewish Documentation Centre. This was Jacques. He did not return. Charles was deported to Auschwitz on 25 June 1942. According to the archives of the Auschwitz-Birkenau Museum, he died there on 15 August 1942.

Through the pages of Dupouy's book, City of Pleasure, we are transported to a time many of us could never imagine… To dive into this world, into the uninhibited and mysterious underbelly of Paris between the wars, and discover the Biederer brothers and their work, order yourself a copy of City of Pleasure.