A big thank you to Ivan Castro for taking time out of his busy schedule to do this interview for us. If you don’t know him already, Ivan is a graphic designer based in Barcelona, Spain, who specializes in calligraphy and lettering. He has been working in the field for 15 years, and has been teaching for 10. Korero Press is proud to have published his book The ABC of Custom Lettering. 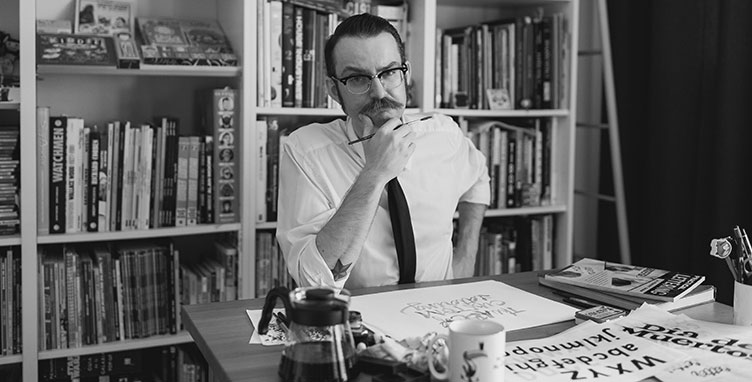 When did you become interested in lettering – a manual skill that some see as an anachronism in this digital age?
I can’t remember the moment I decided I liked letters. It’s something that has been there since I was a kid. I learnt to read when I was just three years old, because I was always looking at signs on the streets. At some point my older sister gave me a Junior Woodchucks Guidebook, in which there was a model for blackletter, so I started drawing blackletter there and then. But it was not until I was at college, under the tutelage of Keith Adams, that I started to study calligraphy seriously.

Your work has a strong pop culture sensibility: what are your influences?
I have a strong respect for the history of calligraphy, but at the same time I’m very attracted to popular graphics, like vintage cinema posters, packaging and signs. And well, sometimes those concepts are contradictory. What I do is try to get the best out of each and bring it to my personal way of doing letters. It may look as if I’m a nostalgic guy who loves to do revival stuff, but what I really do is take all these traditional references and carry them forwards to our contemporary needs in graphic communication.

Are there any artists or designers with whom you have a particularly strong affinity?
Sure, when I started to do calligraphy, the work of the German masters of the 20th century, such as Friedrich Poppl, Werner Schneider, Gottfried Pott, and the godfather of them all, Rudolf Koch, blew my mind. Also Oriol Miró, my calligraphic brother, who will become the best calligrapher in the world: or maybe he is already. No joke. In the more commercial, graphic design-related field, Ken Barber was one of the first guys I started to follow when I became interested in lettering beyond calligraphy. In addition, the use of type and lettering in design as practised by Art Chantry was a revelation to me. However, Ken and Art’s work would not exist without that produced by the army of anonymous letter artists and sign painters of the 1940s to the ’60s, who set up the popular visual culture of the second half of the 20th century.

How long have you been teaching calligraphy and lettering?
I’ve been teaching it for more than ten years, and I’ve learnt a great deal from the experience. When you teach calligraphy to young graphic design students, you focus on the basic historical scripts that have evolved into today’s typographic forms. This ensures that I never forget the basics: a mistake that some calligraphers make. Lettering classes are usually more conceptual, and in order to correct a project that the students are doing, I have to think fast and be quick-witted, because it’s likely they are working with some lettershapes they have made up, or are drawing on references with which I’m unfamiliar. The students show me sketches and expect me to tell them what’s right and wrong about them, and that’s not easy to do. It’s a strong mental workout.

Tell us about your collaboration with the designer/illustrator Mik Baro.
I met Mik a few years ago. I saw a Spanish tour poster for the American band The Trashmen, and I loved the way it was done, with really detailed weirdo-style illustration and proficient lettering work, so I wrote to the designer (Mik) to express my respect. A few weeks later, we met in Valencia and got along really well on a personal level (that’s important). We’ve since created some cool posters together. The latest work on which we’ve collaborated is a poster for a festival in commemoration of a mutual friend, Paco Rufus – a guy who was very active on the Spanish rock’n’roll scene before he tragically passed away a few months ago. 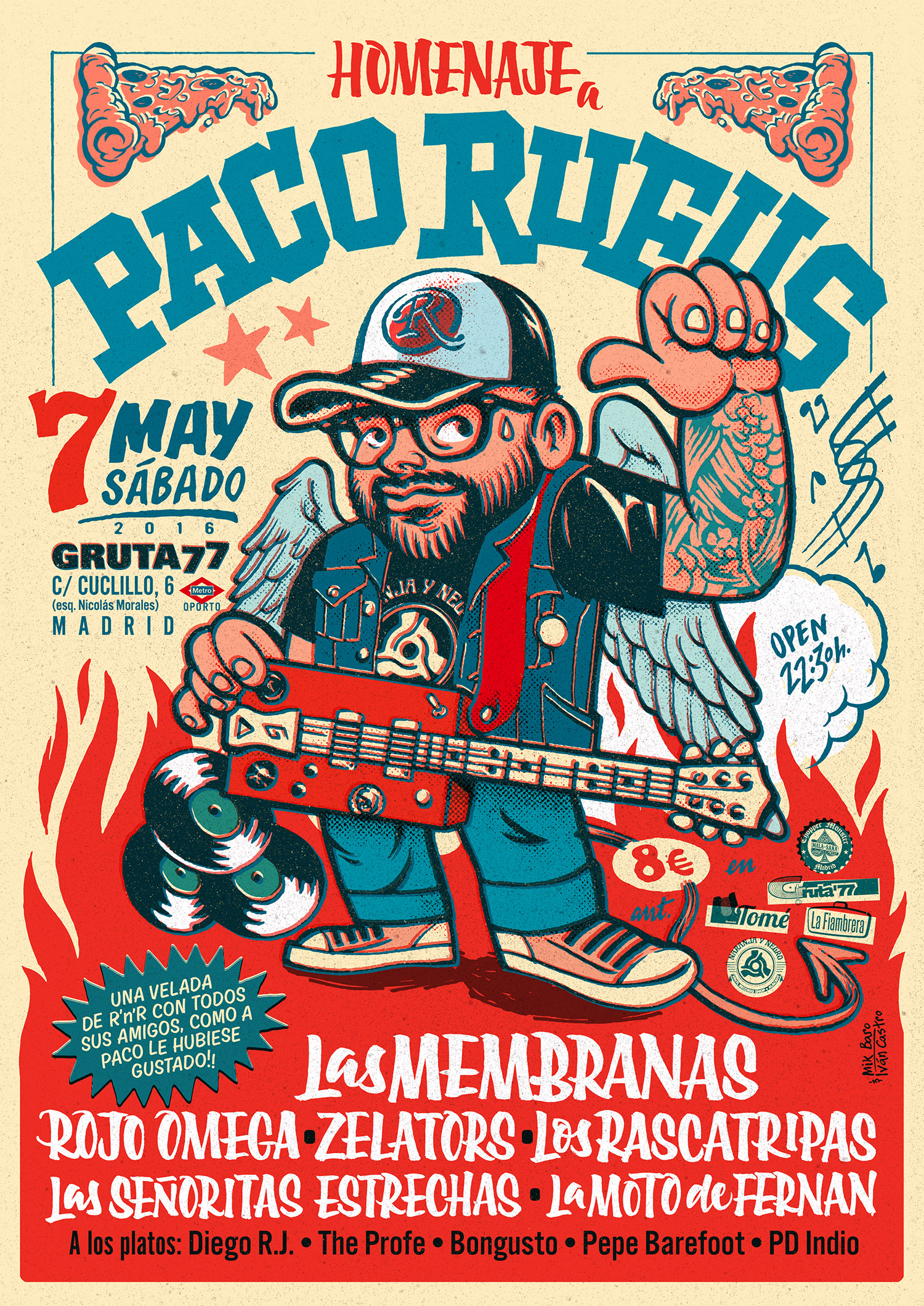 Have you ever considered designing a digital font?
Well, in fact I have, sort of. Back in the early 2000s, I did some shitty grunge typefaces that even then were completely useless, but they were fun to do. I started to design a serious, text typeface that I never finished. These days, I’m sometimes commissioned to design a typeface, and when this happens, I associate with my friend Jordi Embodas, and we share the work. I design the letters and he does the technical stuff that’s too complex for me. You need a very specific mind to do this, because it’s slow and tough work. I’m not able to do it – maybe I’m too lazy. Or maybe I just prefer drawing letters.

How did your love of Tiki begin?
Well, it’s part of my love for pop culture. You know, it’s weird but Polynesian Pop was really – and I mean REALLY – strong in Spain in the late 70s. When I was a teenager in the 1990s, the so-called “Hawaiian Bars” were a remainder of one of the tackiest aspects of that era, and were completely unpopular, but I secretly loved the concept of a place where you could enter into a jungle surrounded by bamboo and have a smoking drink out of a ceramic vessel shaped like an ancient idol. And that passion grew when I was studying graphic design and I got my hands on a copy of Sven Kirsten’s The Book of Tiki. The aesthetics of the interior design, the graphics, and the tiki mugs of the old tiki temples caught my soul, and my wallet, and I started collecting all that old stuff. I even created the menus for a couple of tiki bars (coming up with the drinks list and the recipes, not just the graphic design of it), gave some workshops to professional bartenders, and collaborated with Beachbum Berry on some workshop he did in Spain. Tiki became something of a part-time job for me. But I’m now exclusively focused on lettering, because I no longer have all that time and energy.

What are you working on now?
Among my latest projects are a logo for a stationery company, a cover for a bestselling book, and a collection of socks, which is, by the way, something really fun to do. But probably my favourite work from the last month is the cover I produced for a new album by Los Mambo Jambo, an instrumental Spanish band who make music in a style that ranges from swing to titty shakers, and from exotica to rhythm n’ blues. The resulting design features the largest letters I could use and strong, primary colours, and includes the cover in LP and CD formats, the cover for the digital single, posters, magazine ads, and a T-shirt design; I even got to hand paint the bass drum patch with the band’s logo. It’s been a blast. 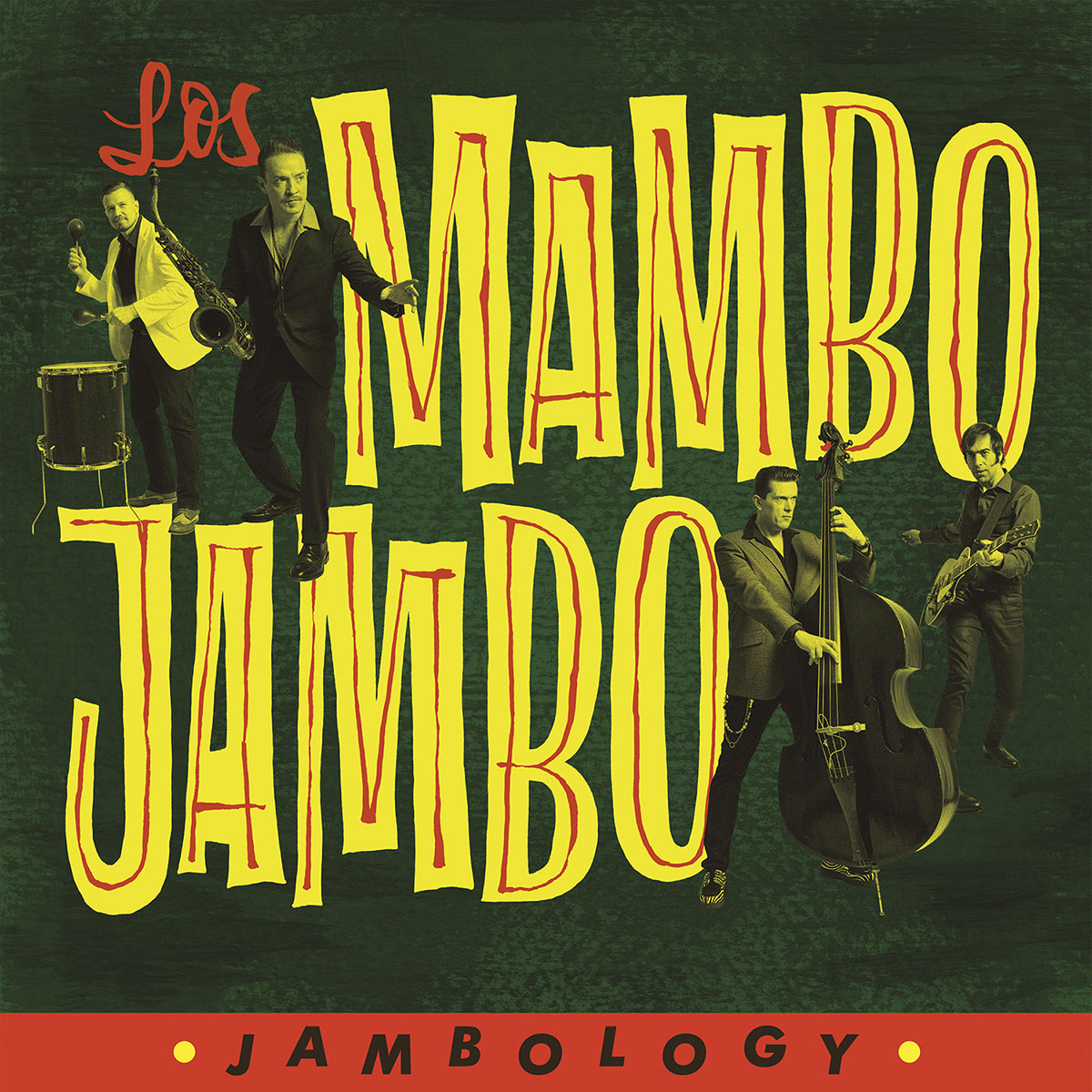 Which projects should we look out for in future?
Well, I have the feeling that writing The ABC of Custom Lettering will be a turning point in my career. I’m pretty sure some cool new projects and clients are about to come, and I’m curious about it. Having said that, I’m really happy about how I’ve been doing until now, so if nothing changes I’ll be OK anyway. After all, I make a living out of drawing letters, which is something I’ve been passionate about since I was a kid. What else can you ask for in life? I guess I’m just a lucky guy.